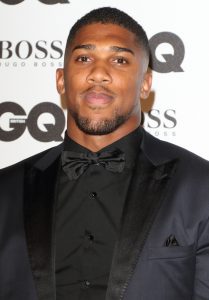 How much does Anthony Joshua earn?

The boxing world champion of the associations WBA, WBO, IBO and IBF was able to convince the whole world of himself with his knockout victory against Wladimir Klitschko. Anthony Joshua has already won 24 wins, 22 of which were knocked out, followed by two defeats. In his first 18 professional fights, AJ earned around 15 million euros. Only in the sold out Wembley Stadium in front of 90,000 spectators was he able to earn around 17 million euros in the fight against Klitschko alone. The superstar also earns millions more per year through advertising income and sponsorship deals (Under Armor, Sky Sports, Hugo Boss, Beats, …). Of course, a lot of money goes to supervisors and management, and taxes still have to be paid. We currently estimate Anthony Joshua’s fortune at 75 million euros.

AJ has announced the first Wanting to become a boxing billionaire. If you consider that he has now amassed a fortune of 75 million euros and he only earned his first really big money in the fight against Klitschko, there is still a long way to go. Since the absolute boxing superstars are unfortunately not currently in the heavyweight division, it will be difficult, so Joshua definitely has to conquer the US market. Only there you can earn the necessary millions via the pay-TV format, for example to penetrate the spheres of superstars such as Floyd Mayweather or Mike Tyson.

This is Anthony Joshua

Professional boxing Anthony Joshua was born on October 15, 1989 in Watford, England to a Nigerian mother and a British father. He started boxing at the age of 18. In 2009 he became an amateur English newcomer champion, only to become British champion the following year. The aspiring professional celebrated the peak of his amateur career at the age of only 23 when he won the 2012 Olympic Games in London.

On October 5, 2013, the brawny Englishman played his first professional fight against Emanuelle Leo, which he knocked out of the ring in the first round. 14 more fights followed, all of which he was also able to decide with a knockout. It was to take until April 9, 2016 for AJ to win his first world title in the smaller IBF boxing association against Charles Martin. Two more times he defended his IBF world title in the same year against Dominic Breazeale and against Eric Molina.

On April 29, 2017, there was the fight that the whole world was looking forward to. Anthony Joshua boxed his toughest fight to date against Wladimir Klitschko in front of 90,000 spectators at the sold-out London Wembley Station. AJ defended his IBF title for the third time and boxed against Klitschko for the vacant boxing world championship of the IBO and WBA association, which Tyson Fury had previously had to resign. Both boxers went down in the fifth and sixth round, respectively, and yet the fight continued into the 11th round, in which Anthony Joshua met 41-year-old Dr. Steelhammer with a technical knockout defeated. The fight was the longest fight of AJ to date, because so far he decided all fights before the 8th round.

On October 28, 2017, AJ met French Carlos Takan to replace the injured Kurbat Pulev, where he had to defend his IBF, IBO and WBA belts. He won the fight in front of 80,000 spectators in Cardiff in the 10th round by a technical knockout

On March 31, 2018, AJ met New Zealander Joseph Parker. It was about all boxing titles of the two boxers, because Parker also held the WBO title, which Anthony Joshua absolutely wanted to have. The fight went lackluster over the full distance and Joshua won for the first time not by a knockout but by a score.

On September 22, 2018, AJ defended his WBO, WBA, IBF and IBO world championship titles against the Russian Alexander Powetikin at Wembley Station in London in front of 80,000 spectators. The Brit knocked out the Russians in the seventh round and remained undefeated. Prize money: around £ 20 million.

Defeat and rematch against Ruiz

On June 1, 2019 Joshua was supposed to defend his title again. He met the American in Madison Sauare Garden (New York) in front of 20,000 spectators Andy Ruiz Jr. Completely surprisingly, Ruiz, who had only stood in for the doping convicted Jarrell Miller, defeated the Englishman. AJ was thus rid of his world title for the time being. The eagerly anticipated rematch rose on December 7, 2019 in Diriyah, Saudi Arabia. The Englishman won the rematch confidently over 12 rounds. The Saudis are said to be alone at AJ. paid between £ 45 million and £ 60 million to fight.

Bulgarian IBF challenger Kubrat Pulev got his chance to beat AJ. Pulev with the boxing record (28-0-1) lost his only fight in 2014 against Wladimir Klitschko. Due to the Corona crisis, the fight was postponed to December 12, 2020 and inevitably took place in front of only 1,000 spectators in the Wembley Arena. AJ knocked out the Bulgarian in the 9th round.

Defeat and rematch against Usyk

On September 25, 2021, AJ surprisingly lost in front of 60,000 spectators at Tottenham Stadium, London against the underdog Oleksandr Usyk in a World Cup title defense. A rematch could still take place in 2021. With this, however, the eagerly awaited mega-fight against Fury is a long way off:

The super fight against the undefeated WBC world champion Tyson Fury (23 fights: 22 wins, 1 draw) has been eagerly awaited for many years. As early as June 2020 it was announced that both parties had agreed on “two” fights. There should be at least 100 million pounds in salary for both boxers. The fees of the first fight will be split 50:50, those of the second fight will be split 60:40 in favor of the winner. Both of them make a fortune with it. At least the first fight should still take place in 2021, provided AJ can get his title back against Usyk.