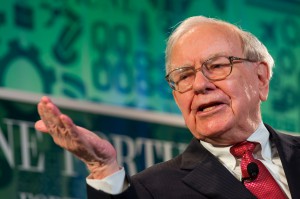 How rich is Warren Buffett?

Retirement? This is not an issue for Warren Buffett, who was born in 1930. Understandable if you are considered the fourth richest man in the world. That reputation is hard earned. The cherished Warren Buffet’s net worth is € 95.83 billion. In order for it to stay that way, or even more, the boss of Berkshire Hathaway is not thinking of quitting. The stock market guru promises: “I plan to work until I have exceeded 100.” Whether he will catch up with Bill Gates or Jeff Bezos remains to be seen. Barack Obama presented the entrepreneur with the in 2011 President’s Medal of Freedom.

The Warren Buffett Net Worth

Warren Buffett’s wealth is inextricably linked to his Berkshire Hathaway holding company. The corporation had 2013 sales of $ 182 billion, bringing it to net proceeds of about $ 28.8 billion. These numbers are increasing every year. In 2014, sales were $ 194.7 billion and profits were $ 28.1 billion. In 2015, the company even generated $ 210.9 billion in sales and $ 34.9 billion in profits. In 2016, too, the company figures were exemplary. Sales were $ 223.6 billion and profits were $ 33.7 billion. Berkshire Hathaway is widely recognized as one of the most valuable publicly traded companies in the United States. The more profits the company makes, the richer Warren Buffett becomes and his fortune continues to grow.

the Father securities dealerWarren Edward Buffett was born on August 30, 1930 in Omaha, Nebraska, with this familial hereditary disposition. He showed a passion for collecting and an affinity for numbers from an early age. As a boy, he used both profitably by adding to his pocket money through smaller shops in the neighborhood. At just 11 years old, the boy had his first experiences in his father’s business. Howard Homan Buffett owned an investment office in which the Filius bought three shares and then sold them again at a profit. The sales proceeds were quickly reinvested in property and business purchases.

The young Buffett remained loyal to his father’s company after his 1951 Master in Economics at the prestigious Columbia University in New York. At the same time, he continued his education and began teaching at the University of Nebraska on investment issues. In 1954 he became a securities analyst at the Graham-Newman brokerage firm. The Buffett Partnership Ltd. was founded in 1956.

In 1965, Buffett acquired Berkshire Hathaway. He gradually converted the previous textile company into a holding company specializing in insurance. Berkshire Hathaway has a reputation for being Buffett’s “investment vehicle”. The underlying principle: to divert the capital of companies with little chance of success into more promising investments. Today Berkshire Hathaway operates in more than 60 different industries, the vast majority of which are primary insurance and reinsurance. Despite its status as one of the most valuable companies in the United States, Berkshire employs just 22 people alongside Buffett himself and Vice President Charles Munger. Warren Buffett’s annual salary: $ 100,000.

The investment firm owns additional shares in Bank of America, namely 11.2%. Shares are also held in the food sector, for example 11% in The Kraft Heinz Company and 9.8% in Coca-Cola. Berkshire Hathaway has interests in more than 25 companies. In 1999, it bought MidAmerican Energy Holding Company which is now known as Berkshire Hathaway Energy.  Most of them had more than 1,000,000,000 euros. At the end of 2017, the Value of all Buffet company holdings at over 140,000,000,000 euros.

One Incidentally, Berkshire Hathaway shares currently cost around 176,000 euros, making them the most expensive in the world. For mere mortal investors there is still an affordable B-share, which is traded around 120 euros each. The annual general meeting in Omaha is now attended by over 40,000 investors who want to hear their great idol speak.

In addition to stakes in companies, Berkshire Hathaway often acquired entire companies. For example, Buffet took over the successful furniture retailer Nebraska Furniture Mart in 1983 and Clayton Homes, America’s largest manufacturer of accommodation in trailer parks, in 2003. But shares in companies were also bought and expanded. Thus Berkshire Hathaway owns 16.5% in Apple and 12.8% in the American bank Wells Fargo. The investment firm owns additional shares in Bank of America, namely 11.2%. Shares are also held in the food sector, for example 11% in The Kraft Heinz Company and 9.8% in Coca-Cola. Berkshire Hathaway has interests in more than 25 companies. Most of them had more than 1,000,000,000 euros. At the end of 2017, the Value of all Buffet company holdings at over 140,000,000,000 euros.

As one of the richest people in the world, Warren Buffett is well aware of his social duty. In 2010 he and Bill Gates launched a company that has set itself the task of “giving something back”. The idea behind “The Giving Pledge” – as the campaign is called – is to win the promise of as many wealthy people as possible, you Use wealth philanthropically. At the beginning of 2014, 122 billionaires and their families agreed to take part.

In 2014, Buffett bequeathed a total of $ 2.8 billion in Berkshire shares to charities, the majority of which went to the Bill & Melinda Gates Foundation. The 4 family-owned foundations were also taken into account. Between 2001 and 2012, the billionaire supported various abortion organizations with around $ 1.2 billion. All in all, he has raised around $ 31 billion for philanthropic causes in his life to date. His last donation was in July 2018, where he again donated $ 3.4 billion to charities. After his death should 99% of the total assets go to charitable and charitable foundations.