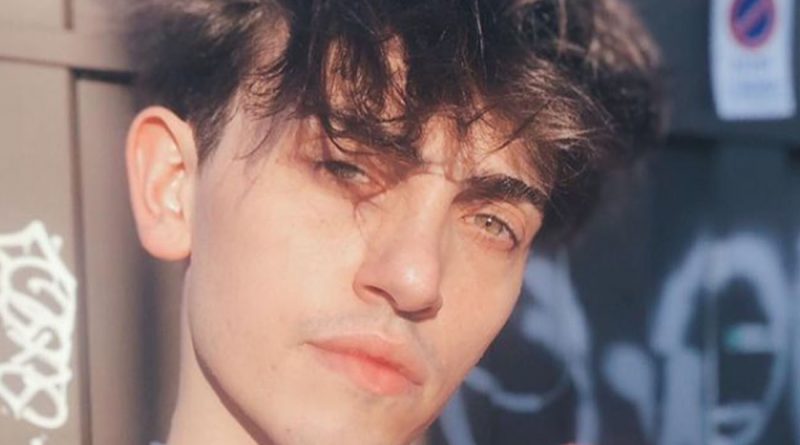 Michele Bravi is a 26-year-old Italian singer, winner of the seventh edition of X Factor Italy. The young man started his career at just 19, and achieved rapid and substantial success. His brilliant career came to a halt due to a road murder charge following an accident on November 22, 2018. After passing the dark period is back on stage like competitor of Special Friends broadcast since 15 May to June 5, 2020. We recently saw him on the stage of the May Day Concert in Rome, together with many other artists.

Who is Michele Bravi?

Michele Bravi was born on December 19, 1994 in Città di Castello (province of Perugia). Son of Stefano and Giovanna Machi, Michele has cultivated it since he was a child passion for singing, never neglecting the dedication to study, being fascinated and inclined. At a young age Michele is one of the voices of the choir of his city and, to deepen his musical knowledge, he also begins to study piano and guitar. While studying at the classical high school he decides to try his luck and enrolled in the auditions of the talent show X Factor Italy in 2013. During the experience Michele makes himself noticed and loved, under the protective wing of judge Morgan, the young singer also conquers Tiziano Ferro, who composes the song for him Life and happiness, which leads Michele to win the seventh edition of the talent show, hosted by Alessandro Cattelan. The popularity of the singer after the victory a X Factor Italy explodes, leading him to collect one success after another, and fourth place at Sanremo Festival 2017 (presented by Carlo Conti, flanked by Maria De Filippi in the artistic direction). The singer’s rising career is inadvertently turned upside down by a bad car accident that sees him personally involved, on suspicion of street murder; for a year and a half Bravi canceled all his artistic commitments due to the legal issues related to the case and to deal with the serious trauma that ensues. In 2020 he returns to the fore by participating in Special Friends by Maria De Filippi. With 3 albums published and multiple and important collaborations to his credit, we have seen Michele Bravi al Sanremo Festival 2021, on the occasion of the evening of duets with Arisa, and more recently on the stage of the May Day Concert in Rome, presented by Ambra Angiolini, Stefano Fresi and the comedian Lillo; on this last occasion Michele intervened during his performance, expressing his opinion on the controversial speech of Pio and Amedeo, regarding the “intentions” in using or not the words considered offensive.

Hugely talented singer, much appreciated especially by young people, Michele Bravi began his career when he still attended classical high school; in 2017, in fact, he participates in the selections of the seventh edition of X Factor Italy and enters it as a competitor in the under men category led by Morgan. Michele wins the program and begins his climb to success. The sudden and unexpected notoriety lead Michele to a short retreat from the scene, in search of one own artistic identity. In 2015 he opens his own YouTube channel where, thanks to the help of his followers, he begins to get closer to his passion again. In the same year he publishes the EP I Hate Music written completely in English. Two years later, in the Big category, he participated in the Sanremo Festival 2017 with the song The diary of errors, conquering the fourth place in the standings and enjoying considerable success with the public.

During his career Michele Bravi releases 3 albums and two EPs:

Last Album: The geography of the dark

Michele Bravi’s latest album The geography of the dark was released on January 29, 2021. It was preceded by the single The short life of confetti which is released on May 15th on all streaming platforms and Special Friends.

THE2020 brings a truly surprising novelty to the Mediaset schedule, we are talking about a special edition of Amici dedicated to former competitors and some big names in the music scene, called precisely Special Friends. One of the competitors in this special edition is Michele Bravi, who returns to television after the dramatic experience of the accident. With him, starting May 15, 2020, the competitors competing for the victory are:

The contestants were divided into two teams and challenged each other with songs and choreography to create a unique entertainment show. Michele Bravi was part of the white team and during his first performance he brought one of his historical pieces The diary of errors. Maria De Filippi she underlined how happy she was to have had Michele among the competitors and how her voice is always exciting and full of intensity.

Very popular and loved by the public, Michele Bravi on Instagram boasts a million followers. With these he shares many daily moments, works and collaborations and thoughts.

The November 22, 2018 is a date that Michele Bravi will never forget: while the singer was returning from his tour rehearsals, aboard his car, caused the death of a 58-year-old woman who was aboard her motorcycle (Kawasaki). Unfortunately, the event completely distorts the young man’s life, the physical transformation undergone by Michele in this period is evident. His body testifies how he painfully experienced the misfortune. This is the reason why Michele has substantially withdrawn (temporarily) from the music scene to close himself in a profound silence. The sentence proposed by the singer’s defender is one year and six months (suspended sentence). The GUP had postponed the hearing fixing it on March 11th due to the civil action of the Italian Association of family victims of the road and of the health emergency. In the last hearing, the Milan judge accepted the plea bargaining request of the defense lawyer which provides for the suspension and non-mention of the sentence in the criminal record. Thus ends a tormented story for the young singer and for the victim’s family.

Regarding Michele Bravi’s love life, the singer came out in 2017 announcing to the whole world his true sexual identity. To be precise, however, Michele is not homosexual, indeed from his words appears to be bisexual. Declares a Vanity Fair:

It happened that I fell in love. A very special story with a guy who is a director, very different from me. It lasted two years but, in terms of what was going on between us, maybe a few days. I met a person who moved me, who was a boy is completely irrelevant: in the future it could also happen to me with a girl

Currently it would appear to be single although there is no definite evidence to this effect. 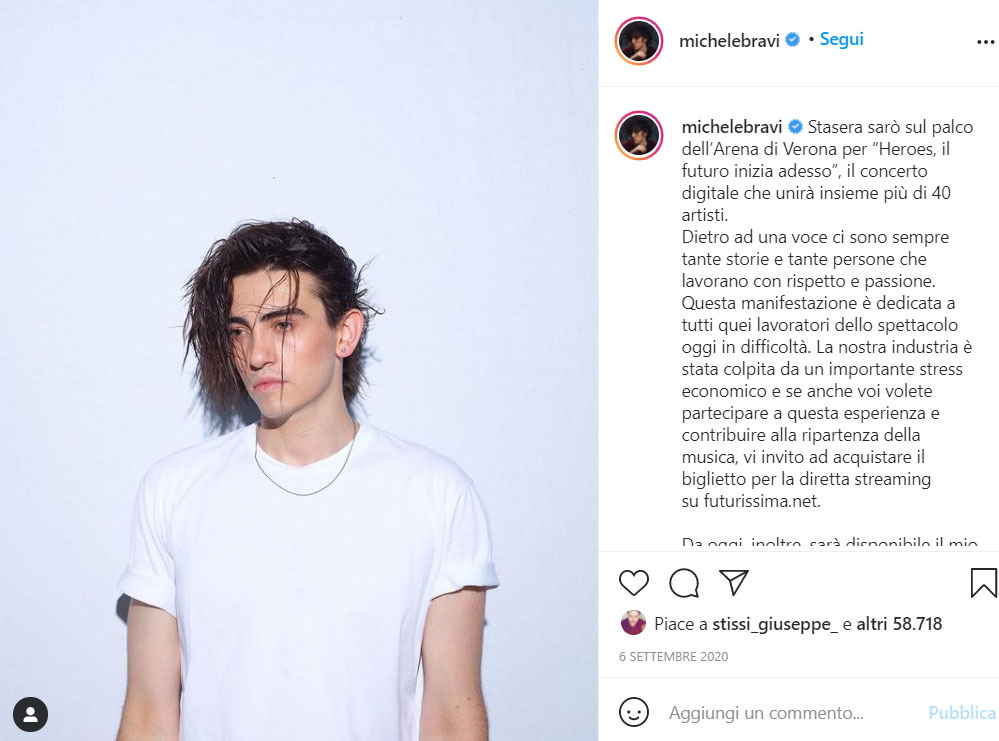 After the accident, after more than a year of not speaking, Michele Bravi was a guest of very true on January 18, 2020. On this occasion he confessed for the first time that after the accident he was shrouded in silence. He was somewhere else, he had no adherence to reality. It was a very painful period from which he came out only thanks to the help of those who love him and to a selfpsychological support made with the EMDR technique or the de-sensitization and re-elaboration through the Ocular Movements. In the following video, a summary of the interview given to Silvia Toffanin.

Michele Bravi has only one tattoo done in 2019, the meaning of which is not known. 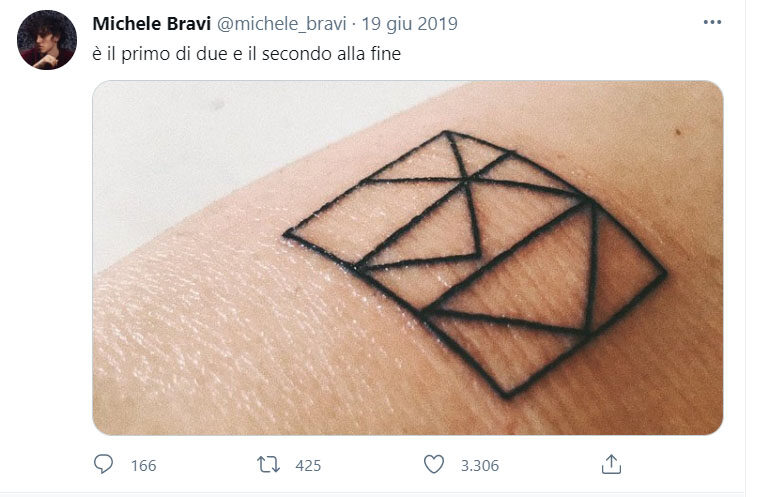 Here is one of the most recent interviews by Michele Bravi, released to Mara Venier.