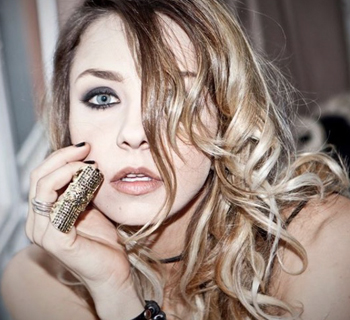 Myriam Catania is an Italian actress, director and voice actress, daughter of Rossella Izzo, famous voice actress and twin sister of Simona Izzo. Historical girlfriend and ex-wife of Luca Argentero had a son three years ago by his partner Quentin Kammermann and it was competitor of Big Brother Vip 2020.

Who is Myriam Catania?

Myriam Catania was born in Rome on December 12, 1979. Her mother is Rossella Izzo, voice actress and twin sister of Simona Izzo, while her father is Vincenzo Catania, a gynecologist, to whom she is extremely attached. Myriam also has a younger sister, Giulia. In 2006 she was involved in a serious motorcycle accident, caused by removing a stop. Colliding with a vehicle due to a stop not signaled by the right signs, she fell on her face. The accident, from which she recovered completely, resulted in numerous fractures on her face, an operation on the jaw and cheekbones with 7 titanium screws and many months in bed. Myriam also stated that she practically has a memory gap of one year: in fact the girl after the accident and the 4-day coma he had a cerebral edema. Inside the Big Brother house, her mother Rossella Izzo told how when one is awakened by the accident near his bed was Luca Argentero and Myriam asked him: “Will you wait for me?” and he replied “forever”.

Myriam Catania is an Italian actress and voice actress, daughter of art. In fact, his mother is the voice actress Rossella Izzo, twin sister of Simona Izzo. Recall that Simona Izzo was a competitor of Big Brother in 2018, with Carmen Russo, Cristiano Malgioglio, Cecilia Rodríguez and many others. Right from the start Myriam follows in the footsteps of the family, participating as an actress in many series and fiction. He dubbed numerous internationally renowned actresses, like Dakota Johnson in Fifty Shades of Gray, Phoebe Tonkin in The Originals, Alyson Hannigan in Buffy the Vampire Slayer and it was the voice of Alexis Bledel in A mother as a friend. In 2015 she was awarded the Golden Lectern for the best female dubbing thanks to the dubbing of Keira Knightley in the film The Imitation Game. Since September 2020 he is a competitor of the Big Brother VIP 2020.

Myriam Catania stated that he participates in the Big Brother VIP to have a unique experience. The thing she will miss the most is playing with his son in bed while uncomfortable which she is most afraid of is not being able to sleep alone! Before accepting participation in the Big Brother Myriam asked the former Luca Argentero for advice. Myriam stated that Luca gave her a number of pros and cons and that in any case their situation is different from the moment in which when Luca participated in the GF he was in fact a stranger while Myriam has a long-standing career.

Myriam in the house of Big Brother is linked to Franceska Pepe. A few days after entering the house Myriam had a moment of despair where she burst into tears while bathing in the pool, discouragement linked to the fact that she misses her loved ones: her partner Quentin and her son Jaques. This initial moment of despair was followed by another in which the actress confided in Stefania Orlando, admitting that she can no longer stay in the house since she misses her son and partner. Subsequently Myriam talking about her life told how the happiest years were those spent with Luca Argentero: 10 years are concise with the most beautiful period of the actress’s life.

Myriam was the protagonist of a tough battle with Enock, Mario Balotelli’s brother. In fact, the girl invited him several times to dance but the boy at one point felt forced and reacted exaggeratedly according to many. Fulvio Abbate, first eliminated from the program, spoke in the studio about a group of people who see Myriam as a foreign body and who therefore tend not to stand her and often bring her into nominations. In the house Myriam received a visit from Quentin and saw a video of his son Jaques. Myriam comes out on televoting in the episode of 12 October.

Myriam Catania was engaged from 2016 to July 2021 with the French manufacturer Quentin Kammermann. The two met by chance in Ibiza and both were coming out of important relationships. Although they sought lightness, they fell in love and had their first child, Jacques, born on May 13, 2017. The couple broke up after several years due to the transformation of love while maintaining an excellent relationship.

In past relationships the most famous is the one from 2006 to 2016 with Luca Argentero (competitor of Big Brother 3). The two got married after five years of engagement, but due to work commitments the two slowly drifted apart. However, the two remained on excellent terms, so much so that Luca, when Myriam got pregnant commented: “This is the miracle of your life, I’m happy”.

However Myriam told in an interview that she and Luca do not have a daily relationship and cannot be defined as friends: after such a long relationship where love was great it is difficult to move on to friendship. In fact, Myriam thinks that if a relationship is born in one way, it cannot end in another. Despite this Luca was one of the first to know about her pregnancy and her new partner.

Myriam has been accused of talking too often about her ex-husband Luca Argentero, but she herself stated that her partner Quentin isn’t jealous at all On the contrary, she told the weekly Chi about this: “What does my husband say? He smiles and shakes my hand. We must be jealous of the future, not of the past ”.