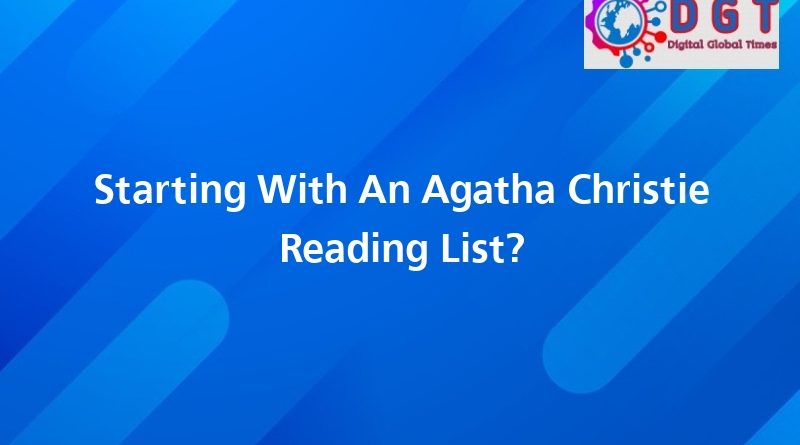 In the world of the endless reading list, you are finally picking up the collection from the queen of mystery.

Not only is her writing famous for transporting you to the mysterious England of the 1930s to 40s, but it is also a phenomenal starting point for many who are planning to start reading more books.

But, it is easy to get overwhelmed at first because Agatha Christie has given us an endless series of books to choose from. Even some avid Christie readers discover new books which they haven’t even heard of before.

Luckily, there is no such chronology to these books, so you can pick any one of them and start reading. However, some might still get confused.

So, if you are planning to read Christie, but are confused about where to start, then here is your own personal reading list.

Who Is Agatha Christie?

Dame Agatha Mary Clarissa Christie, Lady Mallowan, is one of the most prodigious writers that England produced. She wrote a total of 66 stories and 14 short stories, which became sensational all over the world, and the craze still follows.

Christie is especially known for creating two of the most iconic detective characters known to mankind. They are Miss Marple, the clever spinster, and the Hercule Poirot, the marvelous ex-French policeman.

So, when you start reading her novels, you either pick one for Poirot or a story with a little sleuth act by Miss Marple.

So, if you are yet to read one, you should pick one today!

1. The Mysterious Affair At Styles

If you are beginning with your first book, then there is no better pick than Poirot’s first mystery, The Mysterious Affair At Styles. If you are a fan of the cozy mysteries in the English countryside mansions, then this is the perfect pick for you.

This is a fantastic toxicological puzzle where a wealthy woman dies of poisoning in the mansion where Poirot was residing for the time being, and the former Belgium police turned refugee should discover the real killer before an innocent party is condemned.

2. Murder At The Vicarage

Again picking up your first book? Pick our dear Jane Marple’s first case. When the Vicarage is shot dead in the peaceful village of St.Mary Mead, chaos ensues.

The vicarage was known and, most importantly, despised by a few many. Delve into the mystery as Miss Marple, with her excellent sleuthing tactics, discovers the killer among the haters.

3. And Then There Were None

This is one of Agatha Christie’s finest works, hands down. One of the most phenomenal closed-room fiction that literature has ever seen. Ten people were taken to a deserted island after a mysterious invitation from the beach house owner Owen.

But, things take a dark turn when they start dying one by one in the exact same pattern of the menacing rhyme, ten little soldiers. But, who is the killer?

4. Death On The Nile

Another great adventure of Hercule Poirot takes us through the dangerous Nile of Egypt. When the wealthy heiress Linet Ridge dies on a ferry floating on the magnanimous Nile, Poirot starts discovering more suspects than he had imagined.

In a closed ferry, where no one got up or down in the last forty-eight hours, who had the strongest motive to kill the victim? Is it the obvious suspect? Or someone totally unexpected?

Hercule Poirot has long retired from his sleuthing days, and he is finding it hard to gain the same respect among the officer of the Scotland Yard. This was when he was challenged by a serial killer who started murdering his previous clients in alphabetical order.

Poirot must find peace with the police and take their help or go back to his old ways to stop this killer.

If you find yourself bored on a Saturday afternoon, there is no better thing to do rather than picking an Agatha Christie murder mystery.

Make yourself a large cup of coffee, get cozied up, and begin!