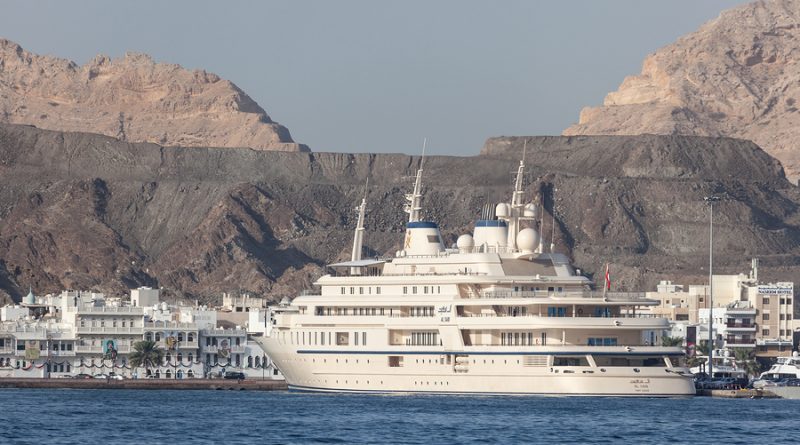 These are the most expensive luxury yachts in the world

Anyone who has money wants to show that too. Status symbols such as villas and cars should not be missing. But the richest people also indulge in some luxury yachts. We have researched for you, it’s amazing how much money you need for a luxury yacht. Interesting fact by the way, most of the luxury yachts listed here were built in Germany! And now we’re going to show you the 10 most expensive luxury yachts in the world.

The “Al Said” was made by order of the Sultan of Oman “Qabus ibn Said”. The official owner is the Sultanate of Oman, which makes the luxury yacht available to the Sultan of Oman. The yacht was built in Germany and can accommodate up to 65 guests. Around 150 crew members should take care of the appropriate luxury for the guests.

A separate cinema and a spacious sauna area should provide the guests with the entertainment they need. The yacht also has a concert hall where a 50-piece orchestra can be found. A helicopter landing pad on the deck of the mega-ship is now standard, as is the case with almost all of the luxury yachts listed.

The yacht was originally built in 2004 for Oracle founder Larry Ellison. In 2007 he already gave half of his yacht shares to David Geffen before he sold them entirely in 2010. The reason for the sale, according to Ellison, was the yacht’s impractical size. He later had the smaller yacht “Musashi” built.

The “Rising Sun” was built like most other luxury yachts in Germany and has a total of 82 rooms on her 5 decks with around 8000 m2. The deck is made entirely of teak wood and has its own basketball court, which can be converted into a helicopter landing pad at any time. A 45-person crew is responsible for the well-being of up to 16 guests. By the way, Oprah Winfrey was already vacationing on this yacht.

The “A” motor yacht is owned by Russian billionaire Andrey Melnichenko. The design was based on a submarine or a US combat ship with radard camouflage function, which resulted in this unique and special shape. There is a helipad and pool at the front of the ship. At the rear there is another pool and a lounge area with jacuzzi, which has a glass floor to look down into the ship’s own disco. Inside there are three elevators to get to the owner’s suite as well as the six guest suites. The built-in glass should also survive a bomb attack. Allegedly the motor yacht is meanwhile for sale, since the sailing yacht “A” (4th place) has succeeded the motor yacht.

This lady ranks 7th among the most expensive luxury yachts. The Dubai, the third longest yacht in the world, was also built in Germany by Blohm + Voss in cooperation with Lürssen. However, in 1997 the construction was stopped by the original client and only taken over by Sheikh “Muhammad bin Raschid Al Maktum” in 2001. The ruler of the Emirates Dubai had the semi-finished yacht of the same name including a Schmimmdock transported to Dubai and completed by the locally based Platinum Yachts FZCO shipyard. From 2006 to 2009, the Dubai was the longest of the luxury yachts in the world and can accommodate up to 115 guests on eight decks.

The “SY A” with its three masts is the largest sailing yacht in the world and is also owned by the Russian billionaire Andrey Melnichenko, who already owns the “A” motor yacht. This is the second time that the Russian is on our list. The masts are almost 90 meters high and the largest of the automatic sails has an area of ​​1,767 m². The A sailing yacht can use its three sails as a drive, but it can also be operated with the two built-in diesel units or purely by two electric motors. The deck is made of teak wood. The largest luxury sailing yacht in the world was also built in Germany by the Nobiskrug shipyard in Rendsburg.

The orderer and owner of the Topaz superyacht is Mansour bin Zayed Al Nahyan, a member of the ruling family of Abu Dhabi. The sheikh is also the owner of the Premier League football club Manchester City. The yacht was built in Germany by Lürrsen in Bremen. There are two helicopter landing pads and a jacuzzi on the eight decks. The Topaz offers space for up to 62 guests in 26 cabins. Unfortunately, very little is known about the interior. Star interior designer Terence Disdale is responsible for the interior, who also lent a hand on Arbramowitsch’s mega-yacht.

The Dilbar Superyacht is not the longest yacht, but in terms of volume it is the “largest” yacht in the world. On 3,800 square meters of living space, “only” 12 luxury cabins will accommodate up to 24 guests. However, the mega-ship has 53 additional cabins for the crew. The luxury on board is the program for the Russian billionaire Alisher Usmanov (estimated fortune: 15.09 billion euros) and his guests. The Dilbar has the largest pool that has ever been built into a yacht. It should be 25 meters long and carry 180 cubic meters of water. There are two helipads on the deck. The yacht was built in the German shipyard in Lürssen in just 52 months.

The “Serene” yacht was commissioned by the Russian vodka billionaire “Yuri Shefler” from the Italian shipyard Fincantieri and was launched in 2011. Bill Gates rented the yacht for a vacation in 2014. Price: $ 5 million / week. A total of 24 guests can be accommodated in 12 luxurious cabins. The Serene also includes a climbing hall, two helipads, three swimming pools, a cinema and a complete spa area. An underwater room should be set up below deck and provide enough space for a submarine. The Serene ranks 3rd among the most expensive luxury yachts.

In 2015, the Saudi Arabian prince “Mohammed bin Salman” bought the Serene for 500 million euros and has been in his possession ever since. Allegedly the most expensive painting in the world is “Salvator Mundi” by Leonardo da Vinci on board the yacht. It was auctioned for $ 450 million in 2017 and was supposed to be on display in the Abu Dhabi Louvre. The prince is said to have liked the painting so much that he had it hung on his yacht. However, this assumption has not yet been confirmed.

2 Azzam – The largest yacht in the world – 530 million euros

The “Azzam” is that longest yacht in the world and owned by the President of the United Arab Emirates: Sheikh “Chalifa bin Zayid Al Nahyan”. The technical marvel was built and completed in Bremen by the Lürssen shipyard in 2013. The yacht is divided into seven decks. The centerpiece is the Azzam salon in the middle part of the ship, which is 29 meters long and 18 meters wide and does not contain any load-bearing supports, i.e. it is completely open. 94,000 hp propel the Azzam to a speed of up to 30 knots. A helipad is already standard with this larger one. 🙂

The Russian multi-billionaire Roman Abramovich is the owner of the most expensive yacht in the world. The “Eclipse” was the longest yacht in the world from 2010 until the “Azzam” was built in 2013 and was manufactured in Hamburg. Although the Eclipse got an extension after the launch, Abramowitsch had to quickly give up the title again. However, due to multiple upgrades, the Eclipse is now a lot more expensive than the Sheikh’s yacht. Originally, the purchase price was estimated at around 350 million euros.

After the renovation in 2015, the most expensive yacht in the world will be worth almost a billion euros. It offers space for 36 guests and 70 employees and includes its own disco, a cinema, two pools (one of which is 16 meters long), 2 helicopter landing pads, 4 motor boats and 20 jet skis. In addition, an unbelievable security system is built in, which is equipped with a missile defense system and a submarine for emergencies. In addition, armored walls and bulletproof glass were installed and the Russian also wants to take action against paparazzi with a laser system that blinds the digital cameras.

? History Supreme – the most expensive fake yacht in the world? (3.4 billion euros)

The really most expensive yacht in the world is said to belong to an anonymous Malaysian businessman. The size itself is not decisive here, however, because the “History Supreme” should only be around 30 meters long. The building material is the decisive factor here, because the mega-yacht was allegedly built in Liverpool by luxury designer “Stuart Hughes” with a total of 100,000 kilograms of gold and platinum. You read that correctly: The supposed boat designer is said to have built 100 tons of gold and platinum in the luxury yacht in a construction period of 3 years.

Sounds like a big fake? It probably is, because the world agrees that the yacht was never built and that only Malaysian businessman Robert Kuok could raise this money. However, he has not bought it and no one has seen the thing yet. Photoshop Skills> 100?