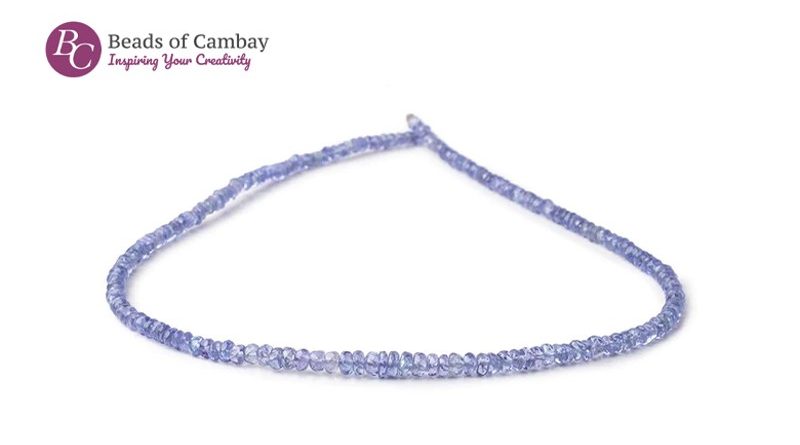 Tanzanite refers to the purplish-blue variety of the mineral zoisite. This crystal can display different colors depending on the direction it is viewed (a phenomenon called “pleochroism”).

Tanzanite is a popular material for jewelry, including rings and pendants. It is second in popularity to sapphire.

Continue reading to learn more about this fascinating blue gem.

Tanzanite is a glassy stone that has remarkable clarity. The Mohs hardness value for this transparent stone is 6.5. It can be scratched easily when worn daily (i.e., As a ring. It is best to avoid wearing it in activities that could expose it to high impact and abrasion.

Tanzanite beads for jewelry making are available in many blue shades, including very light, vivid, purplish, and violetish. The most valuable specimens on the market are those with stronger tones and more excellent saturation. Vanadium is what gives Tanzanite its blue color.

Heating zoisite at 600°C for 30 min changes the state of vanadium. This causes the stone’s blue color to switch to a darker hue.

This stone is pleochroic, which allows it to appear in different colors depending on how it’s viewed. Some rocks may appear blue in one direction but look violetish-blue in another.

The History of Tanzanite

Today, Tanzanite can only be found in Arusha Region’s Merelani Hills. This area is a scarce location for tanzanite production, so it is incredibly scarce and in short supply.

In 1967, the first commercially available Tanzanite was faceted. Jewelers didn’t know about the gem at that time. Tiffany & Co. launched a public education campaign to increase awareness about the blue Zoisite gemstones’ value.

The Lore of Tanzanite

According to the Gem Institute of America (GIA), legend has it that Maasai cattle herders discovered the blue zoisite in 1967. After lightning struck some Merelani areas, it was possible to find the blue zoisite.

After being exposed to fire, the herders observed that brown zoisite crystals had turned into deep blue stones.

The Maasai tribe believed tanzanite was a spiritual stone that invokes calmness, compassion, and peace.

The Metaphysical Properties of Tanzanite

Tanzanite is thought to increase consciousness, intuition, and perception. According to crystal healers, it is believed to help detoxify the body and energize it.

This stone can be used to calm down and heal, mainly when you are in an emotionally charged environment. The stone’s soothing blue color makes this possible.

Tanzanite can help you realize your full potential because it has to go through extreme heat before reaching its stunning shade and sheen. Tanzanite jewelry is supposed to help you find your true self.

The premier distributor of jewelry-making beads and jewelry supplies is BeadsofCambay. If you are looking for tanzanite beads for resale or your jewelry design, there are many choices available at this site.