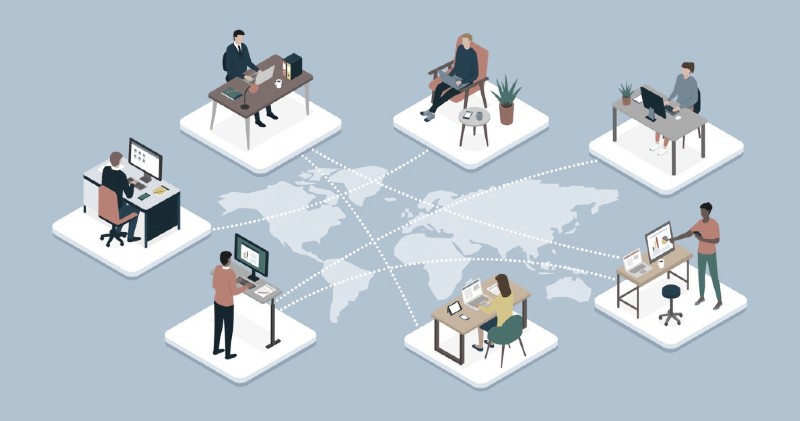 The modern office is mobile since employees can still deliver their quotas from anywhere they are not necessary within the organization. Remote working has taken the stage, and it has since been replaced with many companies’ regular office routine work hours. This has resulted in lower overhead costs and more workers’ productivity.

This, on the other hand, implies that a business is at risk of exposure to several threats over the open networks that workers use when outside the organization’s environment. This risk to a business, data, devices, and data is constantly on the rise; therefore, adopting a zero-trust strategy will not only help to secure workers’ devices on public networks but will also improve security across cloud platforms anytime users access them which means that data remains secure on every device and network.

This is so because instead of accepting that everything behind an enterprise’s firewall is safe, the Zero Trust Security model assumes a breach and validates each request, the device, and the user identity.

Every access request is authenticated, authorized, and encrypted before access is granted, after which least privileged access and micro-segmentation principles are applied to reduce lateral movement, while intelligence and analytics in the Microsoft Security Graph may be used to detect and react to anomalies.

Zero Trust is neither a product nor service; it is simply a strategy or idea. Other ideas connected with this idea are policy compliance, strong user identity, network segmentation, machine identification, and much more.

The main principle of zero-trust security is that threats occur when organizations are too trusting of individuals or devices. Hence, the zero-trust model recommends that no user should be trusted because they could have been compromised. User Identity and device authentication are, therefore, a must throughout the entire network instead of having it only at the perimeter.

By limiting access to the corporate network, it becomes more difficult for a hacker to access certain content. Zero Trust achieves this by introducing a single sign-on and a conditional access policy that brings no change to the existing user-end experience while the data on-site and in the cloud stays secured.

The pandemic gave rise to the need for employees to start working from home in their millions. But unfortunately, it became an eye-opener to threat actors who realized it is the perfect avenue of breaking through remote workers’ virtual private network connections.

The Zero Trust architecture is set to be a timely and best option to address these lapses making remote working safe and secured for employees. It also encourages organizations to keep embracing remote working.

The Role Of Zero Trust In Remote Security

The role of Zero Trust architecture in remote working cannot be overemphasized, seeing that it combines verify explicit, least privilege access, and assume breach results which result in numerous benefits for remote working.

Some of these major benefits include;

Managing traditional security technologies requires a lot of resources- firewalls, gateways, and some other hardware appliances need to be patched, maintained, patched, and replaced regularly.

Multiple security systems also require maintenance, while access for remote users demands a different system from that used for office users. Every cloud service owns its security system that may not mingle with the system safeguarding on-premises resources.

Zero Trust security replaces this patchwork with just a single security and access control system. It protects resources notwithstanding their location and with detailed, granular activity logs,

Traditional remote access solutions channel all remote traffic via a limited number of gateways which works only for a few remote users. This reduces the network’s performance and increases the latency of a user’s connection.

By setting up direct, encrypted tunnels between a user’s device and the resource, Zero trust security routes the user traffic via the most performant and efficient path; therefore, increasing the network performance level restricts

Yet, the most important savings companies recognize most is the cost they can avoid because of their ability to prevent the theft of their proprietary data or customers’ personal information.
Security Benefits

Zero Trust systems are difficult to violate due to their attack surfaces since most zero trust systems conceal resources from view on internal and external networks. So instead of using gateways that announce their presence on the internet, It creates ephemeral, direct, and encrypted connections between the devices and resources.

Since they assume breaches occurred already, the Zero Trust model can minimize the damage that hackers can cause through a thorough verification and least privilege authorizations, reducing hackers’ access to the compromised resources. At the same time, micro-segmentation hinders hackers from accessing other resources on the network.

While the pandemic has proved that productivity is still attainable from remote working, for most businesses, the main concern of remote working is the security risks that come with it. So despite the innovations in cybersecurity, the high level of risk is still high for several businesses.

However, zero Trust has proven to be a challenge for organizations that have failed to implement it properly. Increasing threats, in addition to a constant need to enhance the IT infrastructure, have left several organizations in doubt of what is the perfect solution for them and their employees.

Cloud-based technologies have played a major role in improving an organization’s employees’ performance level. Gartner says that over 70 percent of enterprises have moved their workloads to the cloud and more businesses intend to adopt the use of the cloud, which calls for the need to input necessary measures to ensure the corporate network is safe and secured.